As I have mentioned in many previous bulletins (just don't ask me to recall exactly which ones!) there are 4 ways to learn a new language: by listening, by speaking, by reading, by writing.

How would you rank those 4 ways in order of importance?

A tricky task perhaps. I know you would probably put Speaking at the top and probably Listening second. Am I right? So Reading and Writing come next, with perhaps Writing in last place.

And would you change the order depending on whether it's an adult learning the language or a child? We know that children learn language by copying. We also know that songs have a tendency to 'stick'. This work for children as well as adults - just think of any song you are into now, or one you loved from childhood, and you'll find that you can remember an extraordinary amount of the tune as well as the words. I know someone here in Spain who learned all her English through songs alone (and her English is brilliant!).

Copying. Never underestimate its power when it comes to learning a new language. Don't pay attention to anyone who tells you - as the parent of a language learner, or as the language learner yourself - that copying is a waste of time. Today I came across avid language learner Ellen Jovin's blog, which puts very eloquently the value of copying:

Today, with language-learning, copying remains a central part of my process. Mindless repetition: totally useless. That isn't what I do, though. My brain is switched on so that the sight of the word is meaningful, the movement of my hand copying it over is meaningful, and I am sometimes saying whatever I am copying out loud, too, to bring together sight and sound.

Notice how Ellen dimisses mindless repetition? She knows that's not what true copying is.

The majority of the Speekee worksheets, given that they are for children to learn Spanish, feature at least some copying. And when I was designing them I concentrated hard on making sure each worksheet task followed a similar format: start easy and get harder (the idea being that once you have got the hang of the task, you should be okay; indeed, you should be able to express yourself more freely as you go through that task). Let me show you an example of what I mean: 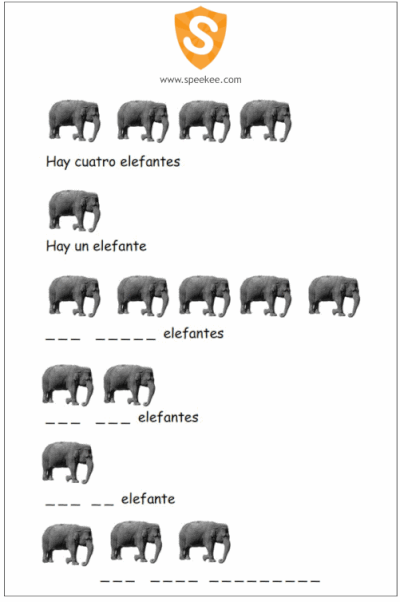 This Spanish worksheet is one of many which complement the first Speekee series, so it's typically for children aged 4-7.

Can you see how copying is working its magic here? And how the task becomes easier for the learner? By the end they are writing a complete sentence themselves!

So much feedback from parents confirms to us that our Spanish worksheets are a great way for kids to consolidate the Spanish they are learning in the Speekee videos. They also allow us to help the young learner work on reading and writing skills they wouldn't otherwise focus upon, Speekee being primarily video based in its teaching method.

Spanish worksheets for kids - vital for developing those reading and writing skills!