SOS - Save Our Siesta!

In a 2013 article about the Siesta in Spanish culture, this image appeared in The Daily Telegraph: 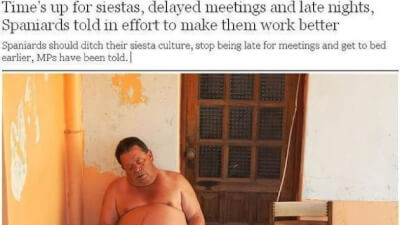 It was not kindly viewed in Spain and was later replaced with this one: 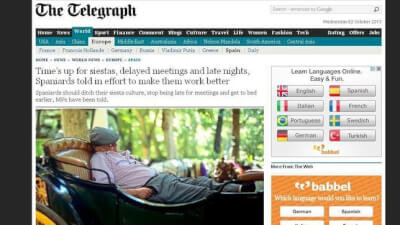 Put it down to a national insecurity if you like, but you can understand the Spanish being upset at the way their famous tradition was being portrayed abroad. I am reminded of how Andalusians - in the south of Spain, remember - were viewed by a man I once met in Santander on Spain's nothern coast. His North versus South argument went as far as to say that all Andalusians were lazy. Not my experience!

In a recent blog post entitled How Spanish am I? I looked at the average number of sleeping hours for a typical Spaniard, and found that they basically don't sleep enough; and that their daily working routine does not tally with that of their European neighbours. But I said little about the Siesta, that great Spanish tradition described by Wikipedia as "a short nap taken in the early afternoon, often after the midday meal."

(Hey Wikipedia, it's not always 'short'!)

You know, the Spanish are onto something with this siesta lark. A 2013 study carried out by londonoffices.com in the UK showed that the worst time in the day to be working is 2.55pm - the point at which the average office worker reaches their most unproductive point of the day. It's also the point at which many Spaniards are oblivious to the world, eyes firmly shut. Later, they'll awaken with renewed vigour for the rest of the day.

You'll see froom the headline in The Telegraph that the Siesta is coming under scrutiny. But must Spain be brought into line with other European countries? Pressures of work schedules, business deals etc may take their toll on this great Spanish institution. Time will tell.

But here's my two cents' worth:

SOS - Save Our Siesta!

And now, in southern Spain, this is Jim signing off, and going for a siesta (-; See you soon readers!