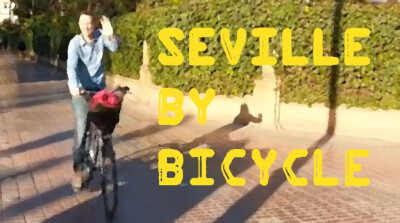 What better way to enjoy one of Spain's great cities than by bike...

My lovely sister gave me a lovely gift for my birthday: a night in 3* hotel in the centre of Seville. But not only was there a comfortable bed awaiting me; bicycle hire was included too, and what fun it was - although if you haven't ridden a bicycle for a long time, I recommend you practice a little before you venture out onto the crowded avenues. Even in February the streets are choc-a-bloc with cars, Sevillians bustle from A to B, and fellow cyclists - with plenty of prior practice - come up quickly behind the unsuspecting starter-outer like me. Fortunately, there's a clearly marked cycle lane which snakes its way around this grand metropolis.

I headed down the main drag towards the river, and came upon the Torre de Oro, or Tower of Gold. Wikipedia tells us the tower was constructed in the first third of the 13th century, and served as a prison during the Middle Ages. Its name comes from the golden shine it projected on the river, due to its building materials (a mixture of mortar, lime and pressed hay). 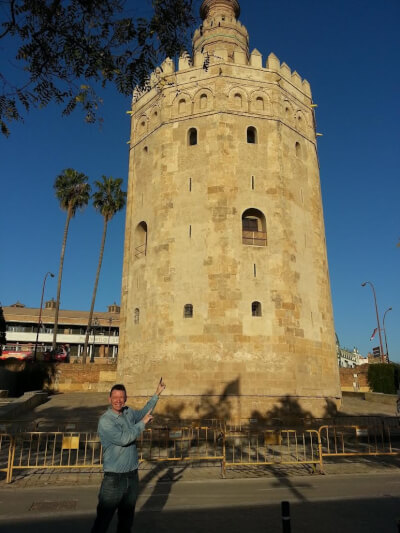 As I followed the line of the river, the cycle ride became a more relaxing affair as the only obstacles now were walkers and their pets, runners and other cyclists. One should be careful not 'switch off' though - I narrowly missed taking part in a crash which happened between two bikes just up ahead.

Deviating away from the river and back towards the city called for more caution as car traffic returned right and left. I stopped at Las Columnas de Hércules, the Columns of Hercules. These are original Roman columns which were taken from the remains of a Roman temple elsewhere in Seville. That temple was dedicated to Hercules, the mythological founder of the city. 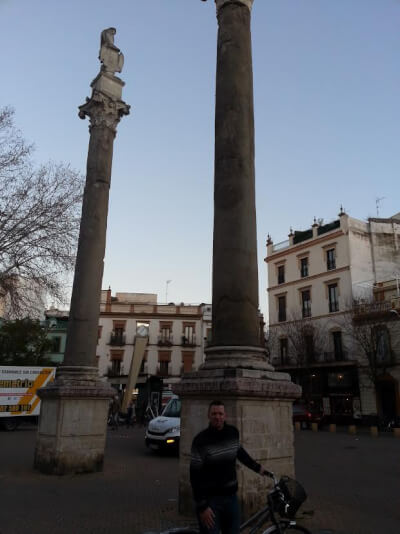 I'm not a city lover by nature but I can assure city lovers that Seville will delight you in so many ways. It's everything the guidebooks will tell you, and more.

The hotel I stayed at is called Hotel Plaza Santa Lucia. I highly recommend this hotel situated in a quiet neighbourhood in an otherwise noisy city, and where room prices start around 75 euros per night in low season. Among the hotel's services, bike hire (-: (-: