There's no more eagerly anticipated fixture in the Spanish club football calendar than FC Barcelona vs Real Madrid, or Real Madrid vs FC Barcelona (to avoid appearing biased in favour of the team mentioned first!). This fixture El Clásico, The Classic. These two old clubs are the fiercest of rivals. But why? There's a lot more to the rivalry than the mere fact FC Barcelona and Real Madrid represent the two biggest cities in Spain. It's more deep rooted than that. Let's look at the history of each club for clues. Real Madrid first.

Real Madrid Club de Fútboll (CF) has its home in Madrid, and plays in an all white strip, just as it did when it was founded in 1902. At that time the club went under another name; the King of Spain named the club Real, or Royal, in 1920.

It was under the presidency of Santiago Bernabéu Yeste, which lasted from 1945 to 1978, that Real Madrid became firmly established as one of the great names in European football. Bernabéu oversaw the construction of a new stadium (the one that bears his name and at which the club still plays today) and the signings of some of the world's top players.

Among those players was Alfredo Di Stéfano, considered by some to be the greatest footballer of all time. He in particular was key in Real Madrid's extraordinary feat of five consecutive European Cup triumphs, from 1956 to 1960. More importantly for the game as a whole, he was a part of the world's first multinational club side.

The Real Madrid team of the 1980s may have been a very strong one, winning five league titles in a row, but it wasn't until 1998 that the club regained the Champions League. A long wait indeed for such a prestigious club.

In recent years, the club's policy of fielding 'galácticos', or world stars (such as Zinedine Zidane, Ronaldo and David Beckham), has backfired somewhat, with individual brilliance proving to be no substitute for teamwork. 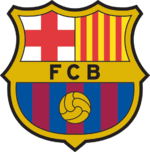 FC Barcelona, known affectionately as Barça, was founded in Barcelona in 1899. The team plays in a blue-maroon strip.

Situated as it is in the part of Spain called Catalonia, FC Barcelona has come to represent that region in a most powerful way. Indeed the team's motto is 'més que un club', Catalan for 'more than a club'. The motto is etched across one of the stands at the club's huge Camp Nou stadium, and it's not unusual to see banners with the same message (see image below). 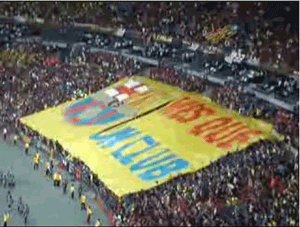 During the years leading up to and including the Spanish civil war (1936-1939) FC Barcelona, which had quickly established itself as one of the strongest teams in Spain, went into decline. Its founder and president, a Swiss by the name of Joan Camper, committed suicide in 1930, and another president was murdered by General Franco's soldiers during the Civil War.

After the Civil War both the Catalan language and flag were banned by Franco, and in the early Franco years in particular great restrictions were placed on FC Barcelona. Despite this, the club grew stronger again, going on to win the league title several times in the 1940s and 1950s.

No resumé of FC Barcelona would be complete without this name: Johan Cruyff. Cruff, the legendary Dutch player, arrived in Barcelona in 1974 (a year before Franco's death), stating that he chose Barça over Real Madrid because he could never be associated with Franco's oppression.

Cruyff went on to become one of the club's greatest players, and their most successful manager ever during his tenure between 1988-1996.

After a period in the doldrums FC Barcelona is one of the top teams in Europe again. If Real Madrid had the Galácticos, Barcelona themselves made headlines with 'Los cuatro fantásticos' (The Fantastic Four), a quartet including Ronaldinho and Leo Messi. At the time of writing Messi remains not only Barcelona's talisman, but also the world's number one player, and he's part of an attacking force that includes other greats such as Brazil's Neymar and Uruguay's Luis Suárez.

When Real Madrid and FC Barcelona play against each other, Spain practically comes to a halt. Loyalties are split because football fans around the country don't just support their local clubs, whichever they may be; they support either Real Madrid or FC Barcelona too - never both!

This is just one example of the friction between the two clubs; clubs which represent different ends of the spectrum in Spain: Real Madrid, the 'royal' team based in Spain's capital, with its historical priviledges and links with the Franco dictatorship; FC Barcelona, the 'independent' team fighting for Catalonia, in an almost constant struggle for acceptance.

Which one is for you: Barcelona or Real Madrid?