Bilingual struggles: How my family is catching on 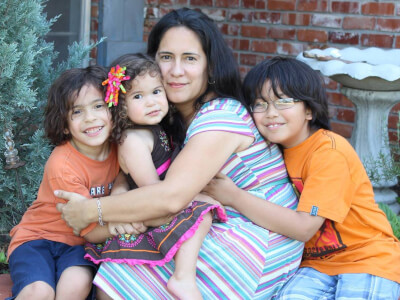 Mariana Llanos is a bilingual writer who lives in the United States. She studied drama and currently teaches at a pre-school. She visits schools around the world via virtual technology to encourage children to write and read. Her books are available on Amazon.com. Her Spanish-language books are Tristan Wolf, niño lobo (Tristan Wolf in English) and El Monstruo Quierelotodo (the Wanting Monster in English). Her other books, A Planet for Tristan Wolf and The Staircase on Pine Street are in the process of being translated.

Here in an exclusive post for Speekee, Mariana explains how bringing up bilingual children is not always as easy as it sounds.

Bilingual struggles: How my family is catching on

A few weeks ago, when I picked up my eleven-year-old son from school, I noticed something different. He sat in the back seat of our van quietly, with a distant look. I looked through the rearview mirror and smiled at him. I know my son. I knew he'd tell me what was bothering him when he was ready. Sure enough, a few minutes later he said, "Some kids were making fun of me today."

"What happened, why?" I immediately asked, worried.

I smiled. At least it wasn't something worse, I thought. "It can be a difficult word to pronounce. But I think you're doing a great job," I told him.

"The kids who speak Spanish say I can't speak Spanish. The thing is, I understand what everybody says, but when I try to talk, I can't put the words in the right order, or say them right..."

I nodded. I knew too well what he was talking about. I'm a native Spanish speaker from Lima, Peru. I enrolled at an English Institute when I was around twenty years old. I've always had a natural disposition for languages and I actually did great in the three year English program that I followed. But when I came to live in the United States, I realized that what I had learned on the books wasn't necessarily the way people talked in the real world.

My need to learn to speak English 'the right way', and especially understand it, brought me to embrace the English-speaking world: We would speak Spanish at home, but outside the house we would talk only in English. I watched TV series and live shows, like The Tonight Show with Jay Leno, in English with English captions. Listening to English-speaking radio shows became my routine when commuting to work. At that moment I was reading the Harry Potter books, so I bought the English editions and re-read the ones I had previously read in Spanish. English became my language of preference when reading books. After a while, I made the decision to turn off the English captions when watching TV. Something funny happened along the way: I started dreaming and thinking in English. My thoughts were fluent, but just as my son said to me, when I spoke, words wouldn't come out exactly the way I wanted.

When he was little he spoke in mixed sentences like, "Can I have agua?" or "Dónde es my car?" We used to sit together to watch Blue's Clues and Sesame Street. I found that it was a great way for me to practice my English skills. But my son was slowly becoming a native English speaker and oddly enough, Spanish was his second language. I have to admit that I didn't 'make' him talk back to me in English. I knew he understood, and for me, that was enough.

Soon our home had two languages, Spanish that I spoke with my husband and to my son, and English which was the language my son talked to me. When our second son came into this world, the two brothers spoke in English to each other and in "Spanglish" to Mom and Dad.

At some point some people made me feel very bad about my kids not being fluent in Spanish. I remember a particular dinner party where I had to sit in front of a woman bragging about her kids being fully bilingual. That wasn't the bad part: she was actually telling me how bad it was that my children, being 'Peruvian', didn't speak Spanish, and how I had to sign them up for school in Peru, something like online homeschooling. Like I said, it was a dinner party, so I was stuck in my chair hearing her simple-minded ideas of how everything should be her way. When I had a chance to talk - believe me, she talked non-stop - I told her that although it was marvelous that her kids were bilingual, they were brought to the United States at age ten and eight respectively, while my kids had been born in the United States, in a mostly English-speaking environment.

Same thing or not, I have come up to the conclusion that every family's circumstances are different. Kids learn Spanish better when they have a bigger family and friends' circle to be able to practice it with, and when their parents are consistent at talking to them in Spanish. I have to admit that I wasn't. But there's no reason I can't start now.

When my oldest son was little we had a hard time finding books in Spanish. Most books we found were atrocious word-by-word translations of Spanish language books. Others were so poorly written that I wouldn't have dared to read them to my kids. There weren't a lot of resources available. Luckily now things have improved and we can find a wider selection of Spanish-language books and resources. Online sites like Speekee are ideal for children who want to learn to speak in Spanish and who might not have the luxury of interacting with Spanish-speaking peers in their day-to-day life.

I'm a writer, and although I write in English, I'm also publishing books in Spanish: the kind of books I wish my kids had when they were younger, but there's no reason why they can't read them now.

Now I have a third child. She is three and she's the most bilingual, at least so far. She can easily switch from English to Spanish when talking, although most of the time "Spanglish" is her language of choice. I speak and sing to her only in Spanish, and whenever she answers in English I repeat it in Spanish. I don't have the need to "English" my world anymore. My oldest son has made the conscious decision to improve his Spanish speaking skills. And I, as with everything he starts in life, am going to help. This is our action plan:

The funny part in all this is that my middle child is being dragged along, and, although he's always being the one that understood Spanish the least, he's becoming more fluent at both listening and speaking.

Back to a few weeks ago, when my downhearted son was sitting on the back seat of my van, I could tell that his feelings had been hurt.

"I visit schools and read my books aloud, and people don't seem to mind my thick accent. Most people think it's cool to be able to speak in two languages."

"I would smile. And ask them to repeat it in Spanish."

The Staircase on Pine Street: http://geni.us/2lhO

Amazon Author page in the US: www.amazon.com/author/marianallanos

Mariana Llanos Inspiring children, one book at a time